How Does MyFitnessPal Work? What Is Its Business & Revenue Model? The GlobalNewswire estimates that the global digital fitness market will generate a revenue of $298.30 billion by 2026 with a 31.25% growth rate every year.

This, along with strict social distancing norms imposed in the last few years worldwide led to a soaring demand and popularity of MyFitnessPal.

And with more positive trends – like the increased use of smartphones, greater sale of wearable devices & better (and cheaper) internet access, the app’s demand is only going to increase.

What does the MyFitnessPal app do?

The app can be utilized 24/7 by users for working out & regularly tracking their performance.

Before we get to how does MyFitnessPal work, let’s understand what led to its creation. It’ll give a peek into the app’s core value, which is an aspect of the business model.

Necessity is the mother of innovation. This best describes the reason for MyFitnessPal app’s creation.

It all started with Mike Lee, co-founder and CEO of MyFitnessPal, wanting to lose weight with his then-fiancé before their wedding in 2005.

Like most of us, they consulted a personal trainer for a diet plan. The duo got a list of nutritious foods and were told to tally up their calorie intake on a notepad. Finding it tedious to manually keep track of his fitness, he sought an automatic, time-saving solution.

As Mike wasn’t impressed with other apps or websites on the market, he decided to create one. Using his coding skills, he came up with the MyFitnessPal website and app. Later, MyFitnessPal was sold to Under Armor for $475 million dollars.

USP of the MyFitnessPal Calorie Counter and App

Its biggest strength is the convenience it offers to users. MyFitnessPal app automatically keeps track of the users’ calorie count.

They only need to manually log what they eat. And they get to know the remaining calorie intake for the day along with healthy food options. This is the brief answer to how does MyFitnessPal Work? 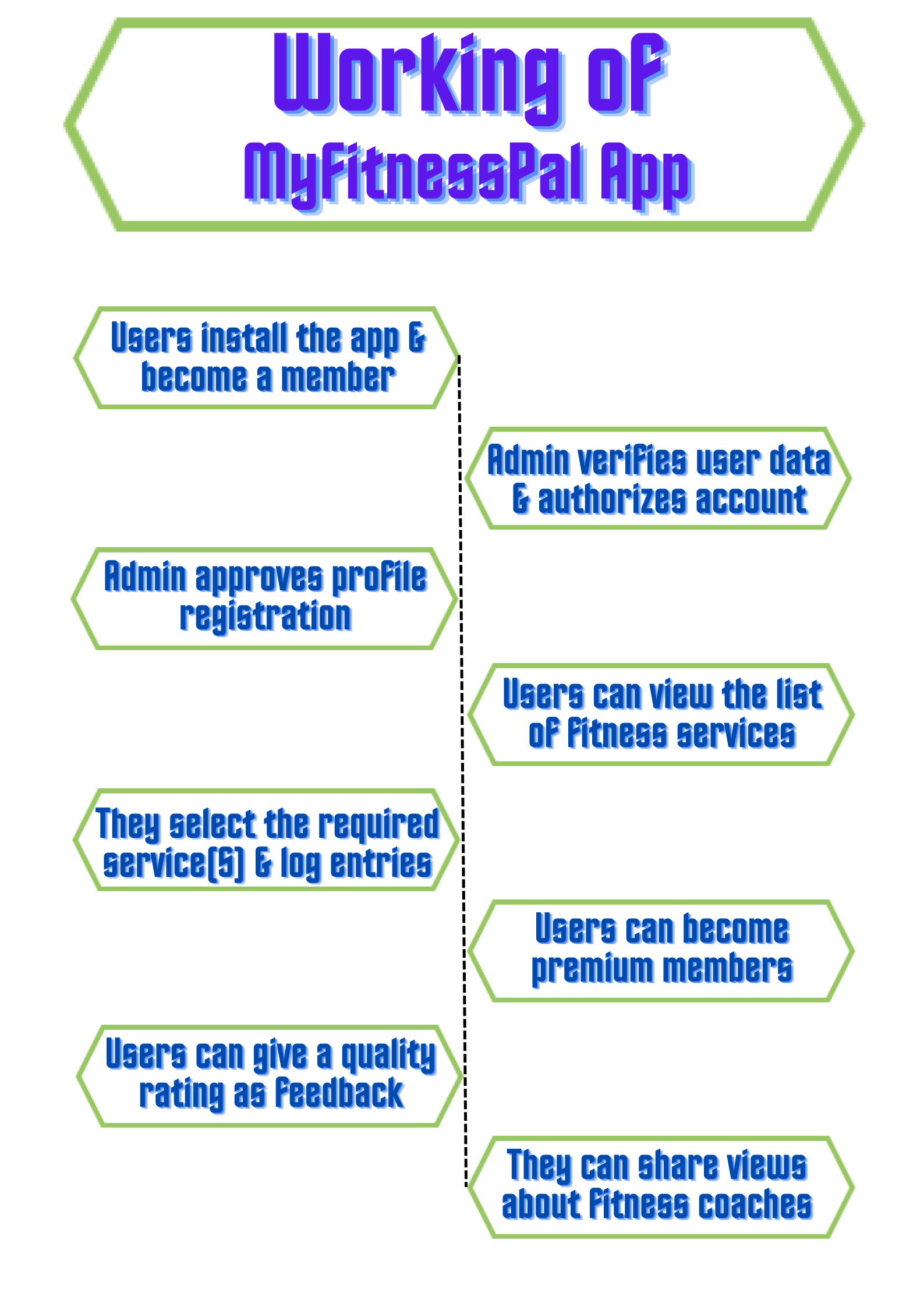 What are MyFitnessPal app’s core features?

MyFitnessPal gives a seamless experience to the user on both the fronts. It’s interesting how something as basic as convenience was enough to give MyFitnessPal the market standing it has today.

The user engagement metrics of other fitness apps also revealed that user’s couldn’t check-in and monitor progress. And without this feature, there’s nothing to guide the user on their fitness journey.

The MyFitnessPal app was an all-in-one solution to this problem. The app allows users to do weekly weigh-ins where they enter their current weight and compare it with where they started.

Further, the app automatically saves this information in the database. It then resets user goals for the upcoming week with regard to calorie intake.

Only in the first instance does it take the users a few minutes to input their initial few meals and exercises. From thereon, it takes them no more than 30 seconds to update the details.

So with every subsequent use, things become easier. In the process, the user is encouraged to make fitness their first priority (if it wasn’t already).

Adapts to Every Customer’s Fitness Needs

This is yet another feature that has made MyFitnessPal successful and get the competitive edge. Before you start delving into how does MyFitnessPal work, understand that the idea is to meet the users along their journey. Build a fitness tracking app that helps them wherever they are to get where they want to go.

Something to note: though these help, it’s not about creating the most extraordinary technology or providing the best service.

So, just a heads up: if you understand your audience well and focus on building a relationship with them, the rest follows. What is MyFitnessPal app’s business and revenue model?

After founding the company, MyFitnessPal’s CEO Mike Lee’s first move was to form a “customer happiness team” that responded to user comments.

The team even invited the customers to share their experiences – one user liked the app as it allowed him to track foods that caused his eczema to flare up.

So, the MyFitnessPal team well understood their consumer pain points. This is yet another core value of MyFitnessPal’s business model.

This can be broken down in two components:

MyFitnessPal app brings convenience to the users. This emphasizes that the company zeals to build better customer relationships. It is the only way (along with quality of product and services) to bring about customer loyalty.

Users can type and search for food options on the MyFitnessPal app. but the true genius of the app is its barcode scanner.

Further, using their smartphone’s camera, the app can scan the barcode of any food item and log it for the user. The entire process takes only a few seconds.

But that’s not all. After scanning a food item, common portion sizes are available from a drop-down menu. This makes it easier for users to quantify the amount of food they’re having – like a bowl of cereal.

MyFitnessPal features a robust calorie tracking option. In the initial stages, it also asks for personal metrics (like height and weight) to form a new user profile.

Accordingly, it suggests entering health goals & automatically sets parameters for the user to accomplish those goals. The mechanism works like this: if the user wants to lose 10 pounds, the app will calculate the required daily caloric intake. What’s more? It also tells the user the approximate time in which the goal will be accomplished.

The makers of MyFitnessPal recognized that some users would need to add details to the set daily limits. For example, specifying the macro and micronutrients in every meal.

Also, losing weight is not everyone’s fitness goal. It could be something like lowering cholesterol level. The app has tools to help achieve this goal too.

Users can get to know new recipes, workout tips, and motivational stories.

The app integrates with almost every popular fitness device including Fitbit & Samsung Gear. Once MyFitnessPal is linked to these devices, it  automatically updates daily caloric goals.

The app further offers workout options to burn those calories.

MyFitnessPal also organizes quantifiable habits like daily steps into charts and graphs. So, a user can understand their performance data even if they are not very tech savvy. 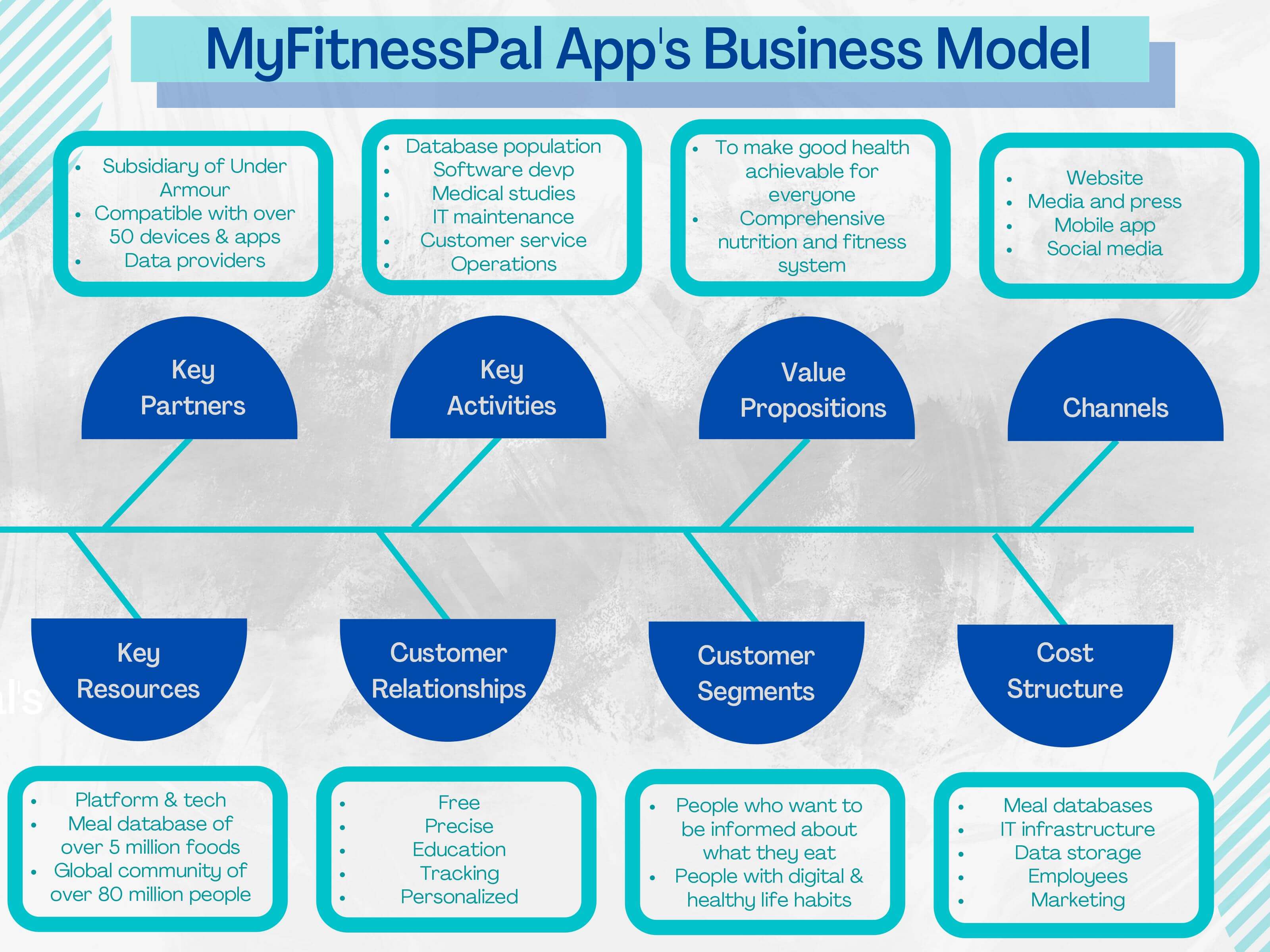 The company has greatly benefited from its freemium model. Under this, the users get access to basic features for free while running ads. Typically, users get accustomed to these features. So, they are willing to pay a small fee every month to avoid the ads.

As a premium member, users can also use the group tracking feature. It helps them share progress with friends and get even-more-detailed data on food. For example, a tool shows the nutrient content of every meal taken on a given day.

The best thing about this tool is that it’s incredibly useful for both fitness novices and advanced bodybuilders.

MyFitnessApp has an easy, user-focused interface with additional features that cater to the fitness needs of every individual. Simply put, the app has taken fitness tracking to a whole new level.

No wonder they have locked a user base of over 170 million customers.

If you too want to build an app like MyFitnessPal, consult with us to get started.