How Much Does It Cost To Build A Social Media App? Social media – a term that almost everyone from the millennial generation to baby boomers love and roam around all the time. If not more at least for 2 hours and 27 minutes a day for sure. Also, some stats by Global WebIndex showcase that more than 58.4% of the world’s population uses social media on regular basis.

Nowadays, social media platforms like Facebook, Instagram, Linkedin, and Twitter are something more than just connecting people worldwide. The realm of intuitive features is here to transform it into one of the leading advertising platforms. The increasing number of paid ad campaigns running on Facebook and Instagram is a righteous example of it. As a result, the overall ad campaign spending in the social media segment is likely to cross US $0.23 million by the end of 2022.

Not in the mood to read the entire post? Let’s keep it quick for you! Here’s a quick social media app development explainer video awaiting you!

So now comes the question of factors contributing to the overall cost of developing and launching a social media app.

Let’s begin by exploring the standard and next-level features first. 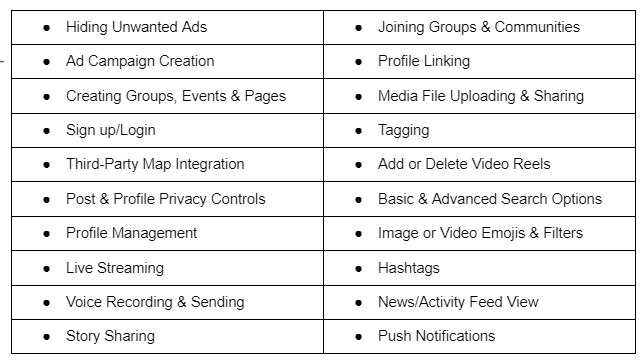 You as an entrepreneur hold complete control over adding lucrative marketplaces on a social media app like Facebook to better market, sell & earn on the same platform. In layman’s language, a social media app developed on your terms can be your next business operation management platform.

Now entertain your random page viewers or online customers via the chatbot integration feature enabling a faster, quicker, and improved customer handling process. The social media app can be integrated with multiple chatbot questionnaires and answers to automate conversation.

AI third-party integration features improve the user retention rate by making the app more interactive and collaborative for the end users. The most common examples of an AI integration feature include fingerprint login, text recognition, natural language technology use, and much more.

What about the standard ones? Well, if you are also wondering about all the standard features you get in a social media app, here’s your answer.

Let’s get into the cost factors in detail now!

This will help you get a better and closer cost estimate for a social media app development. Developing a social media app requires a thorough understanding, a robust app workflow plan, and seamless team collaboration. That’s why the team behind the social media app development project is crucial to decide.

Hiring developers to kickstart the social media app development project is a mandatory necessity. Here, as an entrepreneur, you should be familiar with the developers’ service charges based on the hourly development rates of different countries. Pitch for countries like India, Dubai, or any other Asian country with a high number of certified developers catering at much lower development charges. And just in case you are looking forward to freelancers, know the hourly charges in advance, compare and then proceed. Here’s something for your quick reference. I hope this must have encouraged you enough to get started and make a smart move in the social media app development industry. In case, you require any further assistance, we as the Code Brew Labs team is all here to help you brew a rock-solid social media app that takes your business success to the next level.

Our team of knowledge-rich developers works on the latest technology stack follows the agile methodology and evaluates your business needs minutely, so you can have a robust final product ready within weeks. Maybe that’s the reason we have delivered up to 1000+ social media apps for multiple industries. Be it a white label solution or developing something from scratch, we have a suitable solution for you!

So, come forward, and let’s take your business to heights together!